… I just knew this would happen. 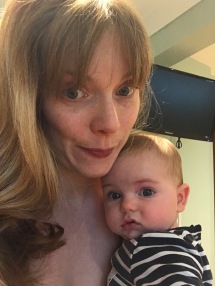 It was the other morning – when I was taking advantage of shower time without worrying if the crying I could hear was in my head or was reality. (I also hear the noise of Aifric’s jungle gym in my head too).

I had made a vow that I would remember our pregnancy (9 months of nauseous joy) – and our labour (forceps, episiotomy, blood loss – another post for another time). That I wouldn’t be like everyone else – ‘oh you’ll soon forget, nature does that to you, you’ll want another one pretty soon.’

NO! I was going to be different. I would not forget. We would not be forgetting any of that any time soon.

So I was not at all amused when I was lathering up and thought ‘huh. That’s interesting. We could have another baby. Sure’.

I lept out of the shower which was SUPPOSED to be a relaxing and chilled experience. Flung open the bathroom door and shouted at Simon ‘I JUST KNEW THIS WOULD HAPPEN.’

Simon – bewildered at what he could possibly have done wrong in the very short time between me getting into the shower and leaping out of it in such rage, and in his new-Dad fog looked at me uncertainly ‘whaaat?’

Rant ensues. All of the above. I was going to be different, I wouldn’t let myself forget. Etc etc etc. Blah blah blah.

But it’s true. Apparently it’s a thing. I haven’t entirely forgotten everything about that year. I haven’t forgotten vomiting into a Sainsbury’s bag in Leicester Square or running to the toilet just before interviewing David Baddiel. I certainly haven’t forgotten using up all my emergency carrier bags and vomiting into an empty breadstick box on the tube (FYI – not waterproof but my aim was ON POINT). Nor have I forgotten the fear I felt during labour when that emergency button was pushed and 15 people ran into the room to get Aifric out. But a switch did flick in my head. I could literally* see it flick.

But whilst nature may be playing tricks on me, let’s hold our horses… there are a few things I’d be keen to do before the light fully comes on… namely run more than one mile and drink a lot of gin.

*Apologies to Simon for using the word literally incorrectly. Although the Oxford English Dictionary does state that I can use the word for emphasis rather than being actually true.

**PHOTO: hanging with the hilarious little lady that makes me want to do it all over again.